Mothers Against Drunk Driving (MADD) ranks Texas the second worst state for drunk driving accidents in the U.S. According to MADD there were about 1,300 reported fatalities as a result of drunk driving in 2011 – accounting for 42% of overall accident fatalities in Texas. Drunk driving has since continued to be a very serious problem in Texas and has led to the injuries and wrongful death of many innocent Texans.

Drunk driving accidents potentially give rise to a number of causes of action. With every victim, our car accident attorney will review whether the accident gives rise to the following causes of action:

It is important all of these avenues are explored to protect the rights of those injured or wrongfully killed by drunk drivers. At Hill Law Firm, the attorneys at our San Antonio firm not only fight to make sure victims receive compensation for their injuries but they also try to change policies to keep the public at large safe.

Overall, about 90,000 Texas drivers are arrested each year on DUI charges.  According to at least one study, the average person drives drunk more than 80 times before they get into an accident or get arrested, which makes the situation potentially very scary.

However, these numbers don’t mean the state of Texas is doing nothing about the problem of drunk driving. In 2015, the Texas legislature passed a law it hopes will improve those troubling statistics. Among the provisions in the new law is one in which many who are convicted of drunk driving will only be eligible for a provisional driver’s license that will require them to install an ignition interlock system, complete with breathalyzer, in their car, so the vehicle can only be started if there is no alcohol in their system. This allows offenders to continue to fulfill their work and family obligations while assuring the public that they’re not driving under the influence. According to MADD, such systems have reduced drunk driving deaths as much as 30-45 percent in some states.

People should also be aware that Texas has what are called “dram shop laws.” While the driver is almost certainly at fault in a drunk driving accident, there are often others who may have been negligent along the line and who should be held responsible. For example, another negligent party could be a bartender who decided to serve the driver too much alcohol. In other cases, it could be someone in a position to prevent the driver from getting behind the wheel. Perhaps someone could have taken the keys and called a cab, but instead handed them the keys and failed to call anyone. In any accident involving someone who was driving drunk, a thorough investigation must be conducted and a number of factors have to be considered.

A lot more must be done to stop drunk driving in Texas. Police departments throughout the state are trying to do their part by conducting more DUI task force operations, but they currently are not permitted to set up sobriety checkpoints. One reason is that courts have ruled that, at a minimum, sobriety checkpoints must be “authorized by a statewide policy governing checkpoints.” There is no statewide policy in Texas. In the end, the people who make the terrible decision to drive drunk must realize that they are putting innocent lives at risk. There need to be stricter laws and better community outreach programs, which means we all must demand that.

“About three years ago I became a victim of a drunk driving accident. My mom reached out to MADD for help. They said I was in need of legal representation and Justin was on their list of suggested attorneys.  Justin explained all of my rights as a victim and promised that he would do everything he could to make the best of the situation that I was in. He made it clear from the beginning that he was an attorney that was only interested in helping true victims, not people who were out to make a few extra dollars.  I felt very comfortable with Justin and his team. They kept me informed every step of the way and explained the progress of the case in terms that I was able to understand. Justin always seemed knowledgeable on the laws and my rights. He fought hard for me and explored every possible avenue to give me the best outcome. In the end, he was able to settle my case with the insurance companies for more than what was initially expected.  I would be happy to recommend Justin to anyone who is in need of legal representation. Just is extremely knowledgeable, trustworthy, responsive, and sensitive to my needs not only as a client but as a person as well. If I am ever in need of an attorney again (hopefully not!) I’ll definitely be contacting Justin and his team again!.”  Client in 2011

“I recommend Justin Hill for legal representation in the areas of negligence in company’ safety policies in the trucking industry, drunk driving, texting while driving and personal injury cases. Justin worked hard to pursue justice in our case. A DWI employee that was driving with a suspended license while working collided head-on with my daughter while she was driving. Justin Hill’s professional knowledge of the laws and procedures involving our case, his skills in mediation, his sensitivity and understanding of the traumatic experience of the DWI as it impacted my daughter along with myself and husband were outstanding and to be commended.  Justin’s ability to present information, provide structure and meaning to our sessions with him along with his ability to listen and be patient with our feelings as we processed are to be commended. He always listened to our concerns and kept us up to date on the case. I am happy to share with you that the case had a successful ending on many levels. Not only did my daughter receive a monetary settlement, but she also received a non-monetary settlement involving company policy changes that will hopefully prevent further DWI’s. I believed this case moved quickly due to his investment, hard work and commitment.  We are grateful for Justin Hill for putting a value on life by “fighting” for these settlements and presenting the non-monetary settlement involving policy changes which created a more responsible corporate citizen as an outcome for this company involved in our DWI case.” Client in 2008

The 4 counties with the highest DUI crashes in Texas, according to the Texas Department of Transportation, are: 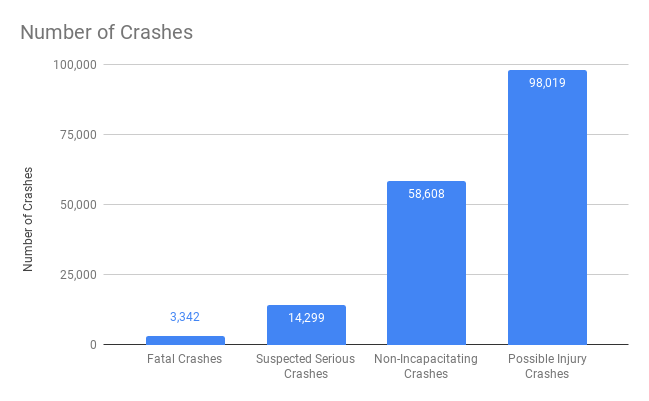 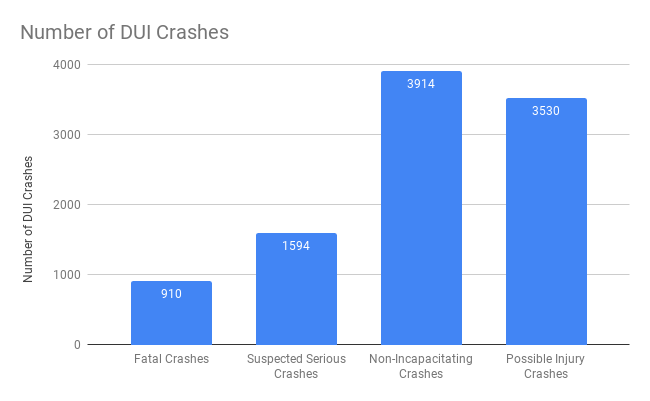 When we analyzed the data, our findings were alarming.

This just shows how severe the effects of driving under the influence are on our community. 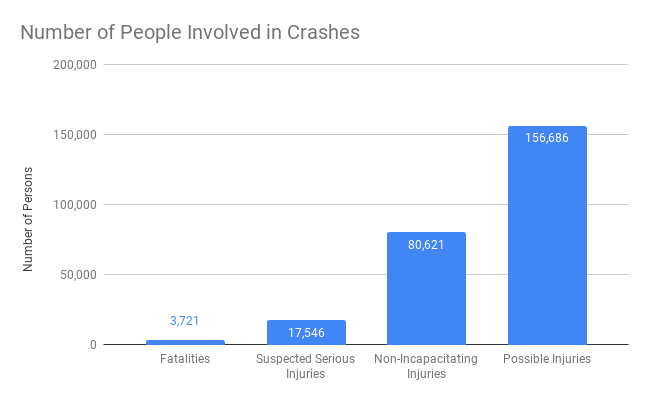 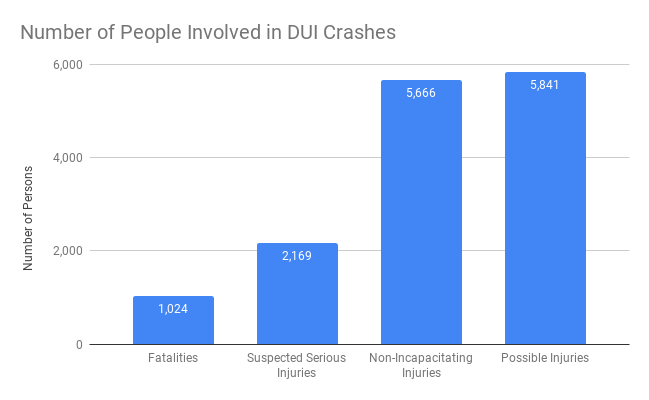 Unfortunately, the results are fairly similar.

In 1993, the National Transportation Safety Board, in collaboration with the National Institute on Drug Abuse, performed comprehensive drug screens on blood specimens from 168 truck and bus drivers from 8 states who were fatally injured while operating an 18-wheeler, commercial truck/trailer, or commercial bus.  One or more drugs were found in a staggering 67% of the drivers tested, with 33% testing positive for alcohol or psychoactive drugs, including marijuana, cocaine, amphetamine, methamphetamine, and ephedrine. Our San Antonio truck accident lawyer has experience handling accidents involving intoxicated truck drivers. Call us for a free initial case evaluation.

Unfortunately, many instances of substance abuse go undetected within the trucking industry due to industry-wide cheating on drug tests.  Magazine publications for truckers advertise products that allow drivers to hide their substance abuse problems by skewing the results of drug tests.

Between April 30, 2012 and May 11, 2012, the drug and alcohol strike force of the Federal Motor Carrier Safety Administration (FMCSA) performed a 2-week sweep, searching for commercial truck and bus drivers who were under the influence of drugs or alcohol.  As a result of their efforts, 287 truck and bus drivers were removed from the road and banned from operating commercial vehicles and 128 companies face enforcement actions due to drug and alcohol violations.  Unfortunately, this sweep only took place in Washington D.C. over a 12-day period.  Imagine what the numbers would be if this sweep would have occurred on a national level.

In Texas, the elements of a Dram Shop cause of action require proving the following:

If you have been injured or have lost a loved one as the result of a drunk driving car accident in San Antonio, do not hesitate to contact our personal injury lawyer for questions or a free case evaluation. It is extremely important to move quickly to make sure your rights are protected, evidenced is preserved, notice letters are sent and that you are given the best opportunity to receive the justice you deserve. Call today at, 210-960-3939.

To Protect You From COVID-19 Hill Law Firm Will Remain Available Over Phone, Email and Video Conference. Learn More Here or Tap to Text Us at (210) 465-3561 Close