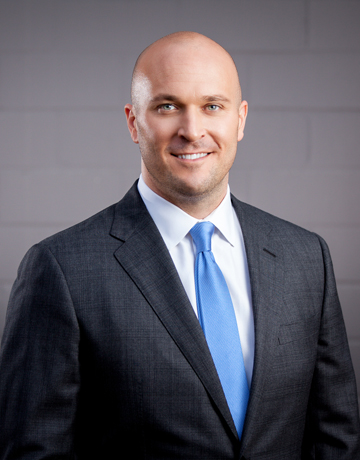 Justin was born and raised in the small town of Burkburnett, Texas. Justin’s mother was an elementary school teacher and his father a high school football coach and high school science teacher. After graduating from Burkburnett High School, he received his B.B.A. in Management magna cum laude from Texas A&M University in College Station, Texas. While at Texas A&M, Justin was awarded multiple academic scholarships including being named a Ford Scholar and received many awards. He was active in student organizations, including serving as a Fish Camp Counselor and an opinion columnist for the Texas A&M student newspaper, The Battallion.

Justin Hill is a trial lawyer whom has been representing individuals and businesses in and around South Texas since 2007. In 2007, Justin joined a nationally renowned plaintiff’s law firm in Texas directly from Baylor Law School. Justin passed up many higher paying defense lawyer job offers, to move to San Antonio and do plaintiff’s personal injury work representing injured people with one of the best law firms in the United States. Within his first year, he tried a wrongful death case to verdict, tried a breach of contract bench trial, and took and defended fact witness, expert, and corporate representative depositions. Further, he spoke on responsible third party practice at State Bar of Texas continuing legal education seminars throughout the state.

Justin was named partner at the end of his first year with the firm. At his first job, Justin worked all aspects of case investigation, case intake and trial preparation on cases ranging from injury to breach of contract to environmental contamination. Importantly, he has been a member of many trial teams in which the cases settled on the eve of trial or went to jury verdict. Justin has also tried industrial accident, Dram Shop, and negligence cases to verdict.  In addition to speaking, he has authored papers discussing automotive product liability, case investigation, joint theories of liability, and trucking (18-wheeler) litigation that have been presented at multiple continuing legal education programs.

In 2015, Justin started Hill Law Firm, a boutique San Antonio personal injury firm, and serves as a San Antonio personal injury lawyer who solely represents plaintiffs in cases against wrongdoers. Hill Law Firm is dedicated to ensuring that each one of our clients gets personal service and justice for whatever wrong they have suffered. The attorneys and staff at Hill Law Firm understand that each case is unique and every client needs full attention and empathy. At Hill Law Firm, Justin maintains a national practice in the areas of personal injury litigation, on the job injuries, sexual assault lawsuits, 18 wheeler crashes, and defective product injuries. Recently, attorney Justin Hill has become involved in advising and representing counties in their claims against polluters. Most recently, Justin secured a Top 50 Personal Injury Verdicts in the State of Texas for 2019 after securing a verdict of $386,009.45 in Williamson County, Texas. In that case, her insurance only offered her $500 to settle her case.

In his career, Justin has won many awards. He has been named a Texas Super Lawyers Rising Star in 2012, 2013, 2015, 2016, 2017, 2018, 2019, and 2020. This is an award given out by Thomson Reuters based on peer votes. In 2019, he was also named to America’s Top 100 Personal Injury Attorneys by America’s Top 100 LLC, a Best Personal Injury Lawyer in San Antonio by Expertise.com, to Million Dollar Advocates Forum by Top Trial Lawyers in America, and Top 100 Injury Lawyers by National Trial Lawyers Association. He has a 5 Star rating in Google, Facebook, and Yelp. Customer service and client satisfaction matters to Justin and the team at Hill Law Firm.

Justin is licensed to practice in the state courts of Texas, and the United Sates District Courts for the Southern, Eastern and Western Districts of Texas. Justin is a member of the San Antonio Bar Association, the San Antonio Trial Lawyers Association, the Houston Trial Lawyers Association, the Oil and Gas Section of the State Bar of Texas, the Texas Trial Lawyers Association (TTLA), and the Attorneys Information Exchange Group (AIEG). Also, in and out of the office, Justin is dedicated to pro bono services. Justin serves as an advocate for those who have been injured or those who have lost loved ones as a result of a drunk driver, he is an active supporter and participant in the activities of the South Texas chapter of the Mothers Against Drunk Driving, and performs many hours of pro bono services for the Rape Crisis Center in San Antonio, Texas.

Finally, in his free time, Justin enjoys spending time with his wife, dog Winston, and young son, bee keeping, raising chickens, gardening, and messing with his podcasts. He loves telling the stories of San Antonio to the listener of his podcast The Alamo Hour and shares lawyer stories and information about the law firm through his Hill Law Firm podcast. Justin loves being an attorney and loves living in San Antonio.