What Are the Most Common Causes of Motorcycle Accidents in Texas? 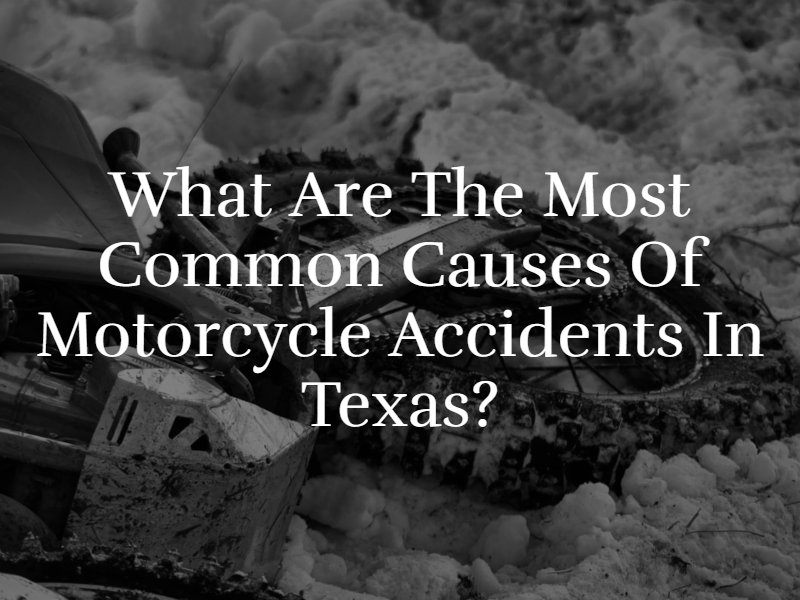 If you are one of many people who ride a motorcycle in Texas, it is imperative to do what you can to reduce your risk of getting into an accident. According to the Texas Department of Transportation, the number of motorcyclist deaths has increased dramatically over the last couple of years in the state, with 17 percent more motorcyclist fatalities in 2020 than in 2019. Learning the most common causes of motorcycle accidents can help you avoid a collision.

There has been a rise in the number of distracted drivers on the roads in the U.S. and around the globe over the last 10 years, largely due to an increase in cell phone use behind the wheel. Many drivers in Texas are guilty of looking down at their cell phones, reading text messages, making phone calls, taking pictures, scrolling through social media and engaging in other forms of driver distraction when they should be paying attention to the road. Distracted driving greatly increases the risk of a driver not seeing a motorcycle and causing a collision.

Speeding is another common cause of motorcycle collisions. If a motor vehicle operator is driving too fast for conditions, he or she may not be able to hit the brakes in time to avoid an unexpected hazard, such as a motorcyclist that suddenly stops in front of the driver. Speeding and other forms of reckless driving, such as racing, weaving between traffic and running red lights can lead to a motor vehicle striking a motorcycle and causing serious injuries.

Driving Under the Influence

Driving under the influence of drugs and/or alcohol was responsible for 25 percent of the total number of people who lost their lives in traffic accidents in Texas in 2020. If a driver is impaired by drugs or alcohol, he or she can make bad decisions behind the wheel – such as speeding or going the wrong way – that increase the odds of a crash. An impaired driver can also experience blurred vision, reduced reaction times, muscle weakness, confusion and other issues that can interfere with his or her ability to safely control a motor vehicle.

If a motor vehicle driver cuts off an oncoming motorcyclist or fails to yield the right-of-way at an intersection, this can result in a catastrophic or deadly motorcycle accident. All drivers have a responsibility to obey Texas’ roadway laws and yield to motorcyclists, when applicable. If a careless or reckless driver breaks these rules, he or she can be responsible for a related collision. A common example is a motorist making a left-hand turn in front of an oncoming motorcycle and causing a T-bone collision.

Too often, drivers in Texas exhibit dangerous behaviors due to frustration or road rage. One example is tailgating a motorcyclist or following too closely. This can result in a motor vehicle rear-ending a motorcycle or a potential override accident. Motorcyclists are not allowed to lane split in Texas, or ride on the line between two lanes, so they are unable to avoid rear-end collisions by driving between two lanes of stopped cars.

No matter what caused your recent motorcycle accident in, contact a motorcycle accident attorney in San Antonio for help with the claims process. You may be eligible to receive a financial recovery from one or more parties, including a negligent driver or the city for a hazardous roadway. An attorney can examine your case to determine the at-fault party. Then, your attorney can help you maximize your financial recovery so that you can move forward with the money that you need to pay for your medical bills and motorcycle repairs. Talk to a lawyer as soon as possible to learn your rights.